I have been resting well for the past two days as a result of my second date by myself – a 10-hour day at Canada’s Wonderland, in Toronto. My 31-year-old body cannot handle roller coasters quite like it used to.

I arrived at noon. An overcast afternoon with intermittent showers did not deter hoards of guests from packing the park. It would appear I am not the only person who has figured out that rain makes the coasters go faster. Here I am at the entrance, armed with only a smile and a fist full of 20s shoved in my bra. Let’s get this started. 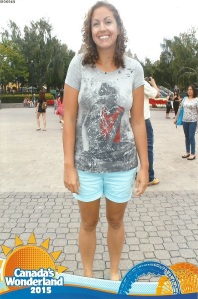 I headed straight for the largest and fastest ride in the park: Leviathan. It also had the longest line, extending well outside of the normal boundaries and into the general pedestrian area. Ahead of me in line was a very short Indian family, excitedly conversing in their native language. Behind me was a group of very short Asian ladies, also speaking a tongue I could not understand. There was no mistaking that the tall white weirdo between these groups was by herself.

Together, we slowly shuffled through the 2-hr maze that ultimately lead us to the 2 minutes of extreme fun we all sought. (This is a strange ritual when you think of it in terms of time invested.) I’d have thought this would’ve been horribly awkward. It wasn’t. I actually enjoyed myself. Oh, and the ride was good too. Shout out to the random 14-year old boy sitting beside me; well done. 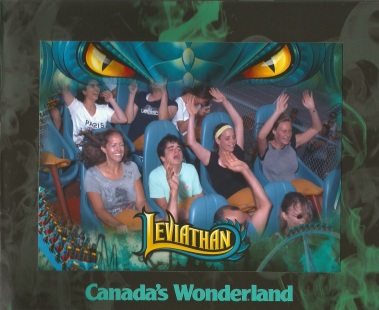 The sun soon came out; and as the day progressed, my calm enjoyment evolved into full blown bliss. I dare declare I had a better time by myself than I may have with other people.

Had I been with a group, I would have had to consider their needs and wants in deciding where we would go next and what we would do. I may have pushed myself to do more than I wanted, making me irritable and unpleasant. Instead, the small decisions that make up my normal behavior became purely subconscious and instinctual. I was relaxed from the gate; but as the hours rolled on, I felt myself really leaning in to the experience.

My usually fast pace slowed to a leisurely stroll. I took my time getting from one place to the next, stopping even, to take in my surroundings and enjoy the time in between. Finally, I was getting to see who I am and what I am like out in the world, without the affect of outside factors. Here is what I’ve learned:

Aside from riding rides, I participated in a lot of fun things I may not have if I weren’t alone. I watched a show with acrobats, I got a caricature… 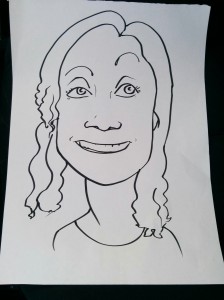 …nailed it by the way, and I went in the waterpark. That’s right; bonus points achieved! My kingdom for a good lazy river.

So why was my date at an amusement park so much easier than when I went mini-golfing by myself? Is it because I was rendered completely anonymous and practically invisible in such a vast crowd? Is it because I had a lot more time to get comfortable? Is it because amusement parks infect you with a general sense of well-being? Perhaps but who cares! It was a great day and I couldn’t be bothered to question it. 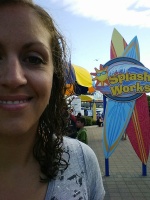 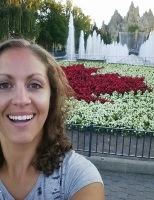 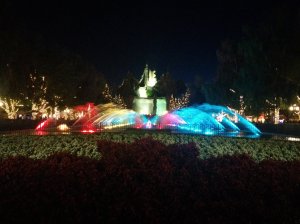 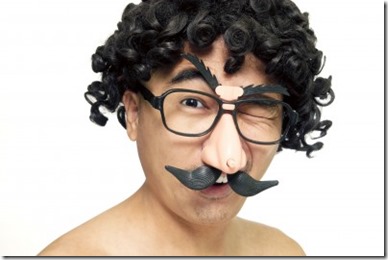 I used to have this friend that I shall call Grouch. Grouch complained about many things, openly judged most people, hated trying anything new, and stubbornly believed that he was correct on all subjects. I often wondered why I hung out with the miserable prick.

With effort I would drag Grouch to clubs and festivals and games, encouraging him to eat without remorse, drink without conscience, dance without restraint, and celebrate with strangers. But with a dismissive shake of the head, he would stand back and hold the camera while the rest of us had fun.

My friends and I used to go on mini trips to amazing cities full of life and sound and culture. We would find ourselves in strange and hilarious situations that I would beg Grouch to participate in. But with an air of superiority and crossed arms, he would stand back and hold the camera while the rest of us made memories.

Weeks after returning from a trip or event, as if on cue, he would look back at our pictures and talk about how much fun he’d had. Incredible.

Truthfully Grouch was not all bad. Amid the eye rolling and head shaking and frowning, were occasional glimpses of a childlike silliness. Encountering this side of him was so rare and so wonderful it needed a name. We called it Wally.

So while Grouch may have been in Toronto complaining about the cost of dinner, it was Wally on the street afterward, enthusiastically moonwalking into the middle of a dance performance.

It was definitely Grouch in New York, recoiling at the loud crowds of tourists, but it was Wally on the subway, passionately playing a stranger’s bongo drum.

In Washington Grouch refused to go dancing and opted to stay in the hotel. But in Boston Wally stayed up late, spitting off the top of a building.

At a wedding reception in Montreal, Grouch scolded our rowdy antics. But on a beach in Sydney, Wally drew a sunblock smiley face on the stomach of a sleepy sunbather.

Wally was spontaneous and carefree and lived only in scarce moments of complete abandon. Grouch was a stick in the mud that could only appreciate a good time in retrospect.

I miss Wally. In his absence I fear that I may have become a Grouch.